Covid-19 Update: We are open and shipping!

Do you have questions about our products or silverpoint drawing technique? Want to request a new or custom product, or place an international order?

Check our Frequently Asked Questions to see if we’ve addressed your question or e-mail us at [email protected] We’d love to hear from you.

First, some discussion and comparisons: Every marking device leaves something on the surface being marked. Pencils are abraded by paper, as are chalks and crayons. From the very beginning, metalpoint worked the same way. Early Italian grounds employed materials which were so abrasive that the resulting surface was the ancient equivalent of sandpaper – yet, unlike later metal-compound pigment-based grounds, the marks were initially grey and consistently faint. Later grounds showed dramatic improvement.

What’s going on here? Can it be that each tiny particle of metal-compound pigment is itself composed of smaller micro-abrasives? I believe that is the case, and that the smaller the particles of silver left behind, the stronger the mark. Consider silver in a macro state, such as cutlery or tea service: granted, over time the surface of the metal would likely develop a patina, but not as quickly as an artist might like. Rubbing the same surface with a cloth treated with polishing compound makes a profoundly dark area on the cloth; in fact, were one to simply rub a piece of silver with one’s hand, one will end up with dark areas on the skin, even if the piece had just been polished. Clearly, the smaller the particle of silver, the better the mark. In any case, it has become obvious that a superior ground must not only include the proper pigment / abrasive agent but must also take into account the action of the binder/vehicle, and how that binding agent affects the action of the pigment abrasive. One should also consider the permanence of the final product, plus perhaps other qualities. Many “grounds” allow silver to leave a mark, but some are better than others.

Isolationist Agents? Some acrylic polymer-based ground formulations coat the individual particles of pigment, acting as an isolator. The result limits the action of the particle against the metal point. Yes, you’ll still get a mark, and many would consider that good enough. But I found it disappointing. Adding zinc oxide powder to acrylic gesso improves the response greatly, but not enough to call it totally successful in my opinion.

The one good thing about acrylic-based formulations is the permanence and inertness, and surface preparation is a little bit quicker. It is not likely to be damaged by contact with moisture. And at least one contemporary artist makes exquisitely beautiful works using basic acrylic gesso, although it may take him up to a year to finish one; I submit a different ground material would speed the process!

Fugitives: Gouache and Chinese white watercolor give a much better response than acrylic-based gesso, but still not what one could hope for. I’ve already mentioned in previous sections why it is difficult to get a deeper tone with gum Arabic-based preparations, and I must also add that they are not in any way permanent; they are easily damaged by water, and the surface is prone to swelling. In damp or humid climates drawings may be destroyed – by the ground actually flaking off of the support, by mildew or by being attacked by gum-eating vermin. And I know from experience that a splatter of spilled water (see image, left, of the damage from water drops on a gum-based ground) will have profound adverse effects on your just-finished silverpoint masterpiece. Not good.

Tips for improving other grounds

Acrylic formulas: Use equal parts acrylic white or acrylic gesso and zinc oxide powder, by volume. Mix it thoroughly, then add enough water to make it the consistency of half-and-half or light cream. Apply one, two or three coats, as above, to stretched paper or panel. Light sanding of the final coat seems to help the response somewhat but also roughens the surface – many acrylic formulations don’t respond favorably to sanding. 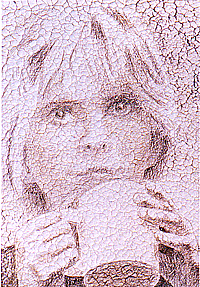 Gouache, watercolor and other gum arabic-based formulas: Get as much out of the tube as you can, and mix it up to a milk or light cream consistency. Apply two or three coats as above to stretched paper only, adding the second coat very quickly to a completely dry surface. Don’t work it too much, and don’t let it cake up, or you’ll regret it (been there, done that. See the example on the left.)

Grounds with pigments other than metal compounds: If it isn’t zinc, titanium or lead based, you’ll probably be disappointed. Almost any white pigment, whiting agent, et cetera, will work better than untreated paper, but just barely. There is a ground being marketed by one of my competitors (the same one who markets the pretty $25.95 silverpoint stylus). It is made using finely ground marble dust and white bone ash with rice paste for the binding agent. I performed a comparison test, and I was disappointed in its response.

Cennini’s formula: Great for historical accuracy, if that is what is important to you, but responsiveness is limited; it’s from the 14th Century, after all… Available from several vendors.

Grumbacher offers a traditional gesso made with rabbit skin glue, zinc oxide and marble dust. I have not tried it, but it should work well enough. I’ve seen it for around $25.00 at art supply stores, in dry form.

Making your own grounds: Robert Massey’s Formulas For Painters (Watson-Guptil, ©1967, available from Amazon.com) is a very valuable resource for artists who want to take charge of their materials and processes. Take a look at the formulas for gessoes and sizes as well as grounds. Remember the usage for which metalpoint drawing was originally intended, as an underdrawing and layout tool for paintings, and you’ll get a clue about how to modify the formulas for your own needs. When testing your own formulations, watch for excessive hardness which may limit the response to the point; this means you have too much binder.


WARNING! Breathing ANY kind of pigment dust is unhealthy, and some traditional pigments are deadly!
I will advise you against it, but if you decide to try Lead White, for instance, use an industrial-quality breathing filter in a space that is used only for the purpose of working with this deadly compound, be meticulously clean before, during, and after use, remove all traces of it when finished, dispose of it in accordance with federal law and local regulations, and don’t allow pets, children or any other creature to come in contact with any amount of it!

Zinc Oxide powder is relatively benign, but it’s still not a good idea to breathe it. When the compound is being made (by burning zinc), breathing the fumes will cause a condition known as “metal fume fever,” and is extremely unpleasant – like the worst case of flu you’ve ever had, with muscle pain, shakes, and dizziness! – but it goes away, and there are no cumulative effects. Persons most at risk typically are welders using electric arc on galvanized steel (which is where I had my episode), however I strongly encourage the use of dust masks when using this or any pigment powder. Contact with the skin usually causes no reaction, with the possible exception of dryness; it’s used in sun block and diaper rash preparations.